The next Mayors for Peace Vision

Last year, the Mayors for Peace "Vision 2020" Campaign to abolish all nuclear weapons ended without having achieved its intended goal. Unfortunately, the Treaty on the Prohibition of Nuclear Weapons, which has since come into force, did little to change this. The fact that the 2020 goal could not be realised was foreseeable for a long time, which is why the Mondialists turned to the Mayors for Peace with an appeal in March 2017 (see World Citizens Forum Archive - only in German). The appeal was renewed in August 2020. 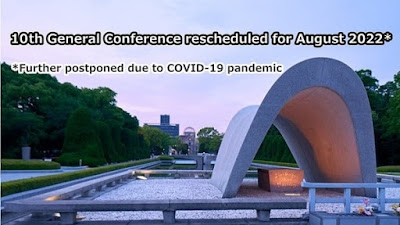 The 10th Mayors for Peace General Conference planned for 2020 had to be cancelled due to the COVID-19 pandemic and has now been postponed again for another year. At this meeting, a new vision campaign was to be adopted. Now this vision and a new action plan are to be deliberated at an Executive Conference to be held online. The date is not yet known.

Mayors for Peace, which now has more than 8,000 cities and towns as members, say they are determined to work for further expansion of membership. They want to reach 10,000 member cities, strengthen initiatives in a close and robust global coalition, accelerate nuclear disarmament and continue extreme efforts towards the ultimate goal: The abolition of nuclear weapons and the achievement of lasting World Peace.

It should be clear that this will not be possible without a better UN. It is now up to the politically conscious World Citizens, global activists and World Federalists to convince the Mayors for Peace in a concerted campaign that they must also advocate for a World Union of actually united nations so that the great goal becomes attainable at all. And not only because of the abolition of nuclear weapons, but also to deal with many other global problems.

World Citizens' Initiative – it's getting real

We have some great news: the World Citizens' Initiative was included in the UN75 Report. This official UN report specifically mentions the World Citizens' Initiative as one of the possibilities for reform and is currently on UN Secretary-General António Guterres' desk. The timing couldn't be better, because right now he is preparing his report "Our Common Agenda" that contain his proposals for UN reform

But this means that we have to double down now. In the coming months we'll have to intensify our campaign efforts to make sure that the World Citizens' Initiative is included in Guterres' final recommendations when he presents them to the General Assembly in September.

This is why our steering committee member Democracy International has launched a crowdfunding campaign for the World Citizens' Initiative.

This is just the first step. In the next months we will need to build a broad alliance of civil society supporters, we will need to reach out to foreign ministries in as many member states as possible, and we need to do research and create materials. For that we will need resources and we will need to begin organising immediately.

Donate now to help us reach the next step!

This is a huge amount of work for our small teams at Democracy International, Democracy Without Borders and CIVICUS. We need your help now for print materials, translations, phone charges, postage, design and other materials and undertakings that cost time and human resources! Can we count on your support and your donation?

The World Citizens’ Initiative as an official recommendation for reform by UN Secretary-General Guterres? With your help, this could already become a reality in September. Please support our work!

To complement the range of topic pages, I have started to list relevant organisations and initiatives on the Mondialist website. 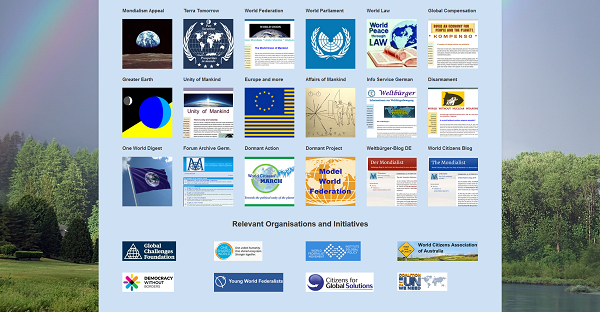 This relevance does not refer to how strong the attention is in the population and the prevailing politics. We know that unfortunately most people care far too little about the political unification of humanity, even if they are committed to a better world. And in real politics, such a thing is still seen as a utopian distant goal. Relevance then ranges from moderate to barely existent.

Here, relevance means to what extent these organisations and initiatives are to be judged in the sense of our World Citizens Declaration Cosmopolis 2100 (see also my Appeal). It is therefore a question of the degree of agreement on content, which is particularly important when it comes to cooperation and the formation of relevant coalitions.

Mikhail Gorbachev on his 90th birthday

Yesterday, Mikhail Gorbachev celebrated his 90th birthday. His merits and his outstanding role in recent world history are obvious, but hardly appreciated in his home country. Now retired, he is grappling with current Russian politics and criticising Putin's ruthless system of maintaining power.

In November 2019, Gorbachev warned forcefully of the growing danger of nuclear war. After all, the very thing he had campaigned for at the end of the Cold War was being undone. At that time, it was a matter of survival.

Unfortunately, his plans to transform the Soviet Union were thwarted. Yet, according to his ideas, another Soviet Union could have been the forerunner of a better world order. The nationalism that arose from the collapse of the USSR caused much suffering and continues to do so.

Sometimes Gorbachev is named by World Citizens and World Federalists as a proponent and supporter on their behalf. This is not quite true, because Gorbachev remained vague about supranational regulations in all his writings. In 1987, one could read of him as General Secretary of the Communist Party of the Soviet Union in Pravda:

We are convinced that a comprehensive system of security is at the same time a system of universal law and order, ensuring the primacy of international law in politics.

But this comprehensive system can be nothing less than the political unification of humanity, preferably in the form of a federal World Union. How else could it work? However, he adds to his "Manifesto for the Earth", published in 2003:

In order to now transform globalisation for the benefit of all, first of all a worldwide governance or even, as some are already proposing, a world government is necessary. I consider this proposal utopian, undemocratic and dangerous.

Here again is the spectre of "World Government". It should be clear that all the ideas for the future that Gorbachev puts forward in his writings, all the solutions he proposes, cannot be realised without the further development of the United Nations into a democratic, federal World Union. One can rightly call Mikhail Gorbachev a "Prophet of Change". However, in the final analysis, his visions remain too timid for a clear goal. And as is well known, even the prophet is unfortunately worthless in his own country.

The Greatest Challenges of Our Time

This book describes the enormous risks that threaten humanity and our world today. However, the analyses in the book do not come from a scientist or politician, but from a man who gained attention and respect for his deep knowledge of risk assessment already in the 1970s on the Swedish stock exchange. When his expertise is applied to the world's current situation, an alarming picture emerges. (Text taken from GCF) 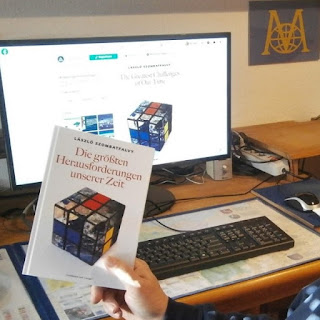 Author László Szombatfalvy, founder of the Global Challenges Foundation, reminds readers and decision-makers that we need long-term plans, not just short-term ones. We are responsible for our future. Long-term planning does not span just one generation.

I had read this book several years ago. It shows the inevitability of a future global legal order if we want to avoid the otherwise certain demise of our civilisation. The resulting logic is a powerful plea to work for the political unification of humanity in a federal World Union, even if the goal still seems a long way off. Urgent needs bring it ever closer. In dramatic circumstances, it can happen very quickly.

You can also download the text of the book as a PDF file:
German   and   English

Today is the World Day of Social Justice

It is a day of action established by the United Nations (UN) in 2009. The day is intended to remind people of the guiding principle of social justice in communities. The distribution of goods there corresponds to the prevailing ethical principles. (This text was taken from www.kleiner-kalender.de.) This year, the theme of the World Day is "Social Justice in the Digital Economy". 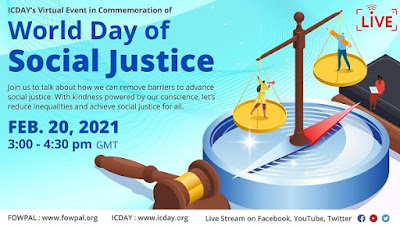 The World Day of Social Justice is widely mentioned in social media. It is mainly about demonstrating general solidarity and organising special help for people suffering from poverty, underprovision and hunger. This is good, better than nothing, but it is the old story of compassion, mercy and development aid. All this is still far from real social justice.

According to the Mondialists, comprehensive social justice can only be realised globally. This requires a supranational system of global justice and solidarity. Even if this may still seem utopian, we have given this idea the name KOMPENSO. As Mondialists, we see this as a fundamental motivation to stand up for the political unification of mankind.