Three months ago a climate activist from Canada opened a petition at Change.org to all heads of state, the UN Secretary General, the President of the UN General Assembly and the citizens of the world:
Join Youth Climate Ambassadors in Demand for Climate Democracy 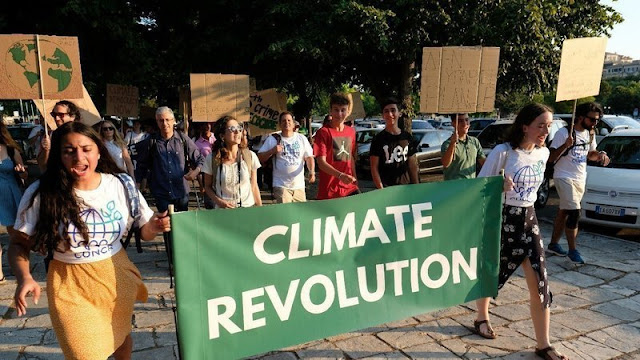 The petition calls for democratic co-determination of the world's citizens in coping with the climate crisis, the establishment of a United Nations Parliamentary Assembly and global jurisdiction to combat environmental crime. To this end, the "San Francisco Promise" is to be kept and the United Nations Charter is to be reviewed and reformed. The petition was initiated by a seminar of the Center for United Nations Constitutional Research (CUNCR). To date, it has only received 55 approvals.

The text of the petition differs from what the mass of climate activists of Fridays for Future worldwide demand: That the governments of the nation-states should take more care of climate protection and take appropriate measures against the climate crisis. The problem is that the current 195 sovereign states of the world are standing in each other's way in the fight against climate change. The responsible politicians are prisoners of their systems. National sovereignty is the greatest obstacle.

It is therefore unlikely that in the foreseeable future there will be any political activity on the part of governments that will lead to hopes of effective measures. No major demonstrations or civil disobedience actions will change this. The global institutions that would have to be addressed for this purpose do not yet exist. The UN is powerless. Protest alone will do little to bring this about. There must be a much more constructive element.

Fridays for Future calls again for a global climate strike on 29 November, "loud, angry and uncomfortable". The tone is getting sharper. The resentment and impatience are understandable, but the responsible politicians will not be influenced by it. It looks more likely that Fridays before Future will lose acceptance among the population and thus also among schoolchildren. The 29 November will show it. If complications arise from nonsensical actions, that will play into the hands of authoritarian forces that promise people to restore law and order. I would especially like to recommend this article:

We need a World Parliament to deal with the climate crisis

I had recently added all the Fridays for Future and related group pages available on Facebook - there were about 250 - individually and made them attentive to the problem. I also called for a first step to support the Campaign for a World Parliament. There were isolated positive reactions, unfortunately too few to hope that the energy of the movement could be transformed into global social institutions. I will try again in the next days with this blog post.
Eingestellt von Mondialist um 20:22