Former Soviet leader Mikhail Gorbachev has warned that the current standoff between Russia and the West is putting the world in “colossal danger” due to the threat from nuclear weapons.

In an interview with the BBC published on November 4, Gorbachev called for all countries to declare that nuclear weapons “must be destroyed” in order to “save ourselves and our planet.” “As far as weapons of mass destruction exist, primarily nuclear weapons, the danger is colossal,” he said. Fears of a renewed nuclear arms race have heightened since both the United States and Russian this year withdrew from the Intermediate-Range Nuclear Forces (INF) Treaty that was signed by Gorbachev and U.S. President Ronald Reagan in 1987. 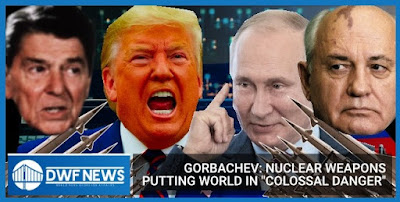 A nuclear war would destroy all efforts against climate change. The earth would become uninhabitable for us humans and many other living beings. Not in centuries, but very quickly.

It's all been known for a long time. It is not for nothing that the UN now has an international treaty banning nuclear weapons. But is a world without nuclear weapons even possible? The Mondialists have this question on the topic page

answered. We believe that a world free of nuclear weapons will only become possible if humanity joins together politically to form a federal World Union.
Eingestellt von Mondialist um 01:00