One often hears the opinion that this year marks the beginning of a new decade. That's not true. It is confused with the colloquial 20s, which range from 20 to 29. No matter if millennium, century or decade, they always start with a 1 at the last position. So the next decade does not begin until 1 January 2021. 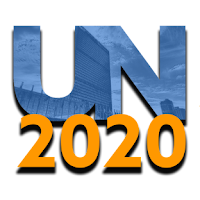 What 2020, the last year of the 202nd decade of our era, will bring, is uncertain. A whole series of dangerous conflicts are looming. In this situation, the UN seems weaker than ever. This year, it will be 75 years old, and many NGOs hope that the anniversary will provide new impetus for its further development. To this end, concrete proposals will be presented, from the revision of the UN Charter (San Francisco promise) to the creation of a Parliamentary Assembly (UNPA Campaign). I try to report on this continuously in this blog.

The climate crisis is expected to worsen noticeably this year. What can be expected less is a credible climate policy on the part of governments. One should not be deceived by declarations of intent. The nation states are still prisoners of their systems. The world climate is a matter for humanity. For affairs of mankind, the UN absolutely needs an independent sovereignty. After all, the climate crisis is more dramatic than most people want to admit. It threatens to escalate into a climate catastrophe.

"There will be chaos and wars, there will be millions of deaths and uprisings and flight and expulsion of unimaginable proportions and looking away and cruelty and decay of what we call civilization. There will be diseases that are millions of years old, trapped in the ice, brought to life and killed by the melting of the ice. There will be the sixth extinction, and it is not clear whether human beings are not among those for whom the Earth is no longer a place to live on."
David Wallace-Wells

Unfortunately, Friday demonstrations, however necessary they may be, do not help either. Therefore, the appeal to all those who care about the climate and the future of humanity remains: Stand up for the political unification of humanity in a democratic World Union! Even if this sounds utopian, it is a real chance.


See also follow-up article: What else will happen in 2020?