On 10 and 11 December 2019, WCPA hosted the conference "Climate Change and the Constitution of the Earth" in the Indian city of Sonipat to "address our planetary crises in the light of the Earth's constitution". What is meant here is the "Earth Constituion", a comprehensive draft for a world constitution. According to the report on the WCPA website, about 70 international participants gathered in the rooms of the O.P. Jindal Global University. 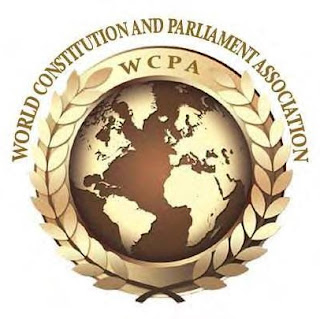 In terms of content, the conference was more about internal affairs than climate change. Attendees were honored for their achievements and a "WCPA Global Peace Leadership Award" was presented to three deserving recipients. It also dealt with the organization of WCPA groups in several cities in India and the attempt to establish a "WCPA Global Communication Center" for three years. The necessary financial means for this could not be raised so far. It was therefore decided to no longer admit new members free of charge as before, but to charge a fee of 1000 rupees. Donations for the Center can be made to the Earth Federation Institute in the USA, among others.

The final declaration adopted by the conference then addressed the actual conference topic:
"The Constitution for the Federation of the Earth declares that a protected and healthy planetary environment is a fundamental human right. Without the protection of our planetary biosphere, which supports all life on Earth, no other rights for humanity can be realized."
It was decided "to combine the pursuit of spiritual transformation with the pursuit of structural change in our fragmented planetary economic and political systems."
What follows are trivial statements and a whole series of declarations of intent without any serious background. In return, the "Provisional World Parliament" of the WCPA wants to divide the earth's surface into 1000 world constituencies. 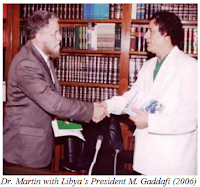 I have published an overview of the World Constitution of the WCPA in German language at the World Citizen Information Service. This information is based on a review of the activities of the WCPA and its president Dr. Glen Theron Martin in the former World Citizens Forum. My initially positive attitude towards the WCPA, which I knew from the days of Philip Isely, changed after it became clear how much the association has now slipped into the irrationality of esoteric fantasies under the presidency of Dr. Martin. How this can lead to political nonsense is shown in the photo of the handshake between Dr. Martin and the dictator and terrorist patron Muammar al-Gaddafi, whom he himself described as the "great leader" in the Declaration of Tripoli. As if that wasn't bad enough, the photo was also published in a brochure (PDF page 8), as if it was nothing to be ashamed of. This is stupidity taken to extremes.

In Dr. Martin's latest article, the advanced loss of reality becomes unmistakably apparent: The world is abysmally evil. We should not continue to participate in this evil world and non-cooperation with evil is our duty. In doing so, he refers to Mahatma Gandhi, who in reality had been anything but a nice person. Only the "Earth Constitution" brings us salvation. It is raised like a holy scripture. This is almost like a sect. No, the WCPA is currently untrustworthy. Who's gonna take this seriously? It is regrettable that this also affects the Democratic World Federalists, because their president Roger Kotila is also vice president of the WCPA. And Dr. Martin is a board member of the DWF.