The World Day of Religion takes place every 3rd Sunday in January. It was initiated in 1950 by Bahá'ís in the United States to promote their faith. The unity of religion is one of its main teachings. Initially celebrated only by Bahá'ís, World Religious Day is now popular with other organizations and church-related institutions that promote interfaith dialogue. Events to this end are held internationally. The purpose of World Religion Day is to highlight the positive commonalities of all religions in order to contribute to peaceful coexistence. 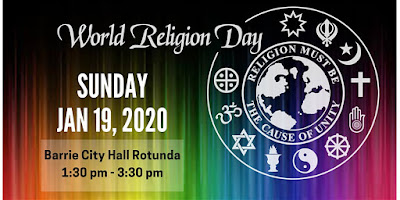 As a Mondialist, I am naturally in favour of followers of all religions communicating with each other without prejudice and of tolerance in the event of differences in matters of faith. As a free Pastafari, however, I must point out the greatest commonality of all religions: There is no proof for the correctness of their doctrines and claims. They are contradictory in themselves and do not correspond to the scientifically proven laws of nature and the current state of humanistic enlightenment.

Religious beliefs are largely based on faith. Blind faith is a source of grave error. Religions can therefore be misused for power interests. Most atrocities in history bear witness to this. As for Bahá'ís, if they believe that the salvation of the human future lies in a global God-state modelled on their system, with all its prohibitions and laws, they are sorely mistaken. Thus there can be no unity of mankind.

Nevertheless, interreligious dialogue is to be welcomed, because it can defuse the aggressive friction between the faiths. We had discussed the question of whether religions can contribute to world peace in the World Citizens Forum (German). In conclusion, I can take a positive view of World Religion Day.