When I wrote "2020 is going to be something" at the beginning of the year, I had no idea what would happen to mankind in the following months. I am not a prophet, astrologer or clairvoyant. Today, the coronavirus pandemic has overshadowed all other important issues. At this point, we don't know if the virus can be stopped. All that is certain is that it has stopped us. All other problems remain the same. The meetings, conferences and actions planned for this reason had to be put on hold for the time being.

The climate activists had moved their "strike" to the internet. There were a few exceptionally authorized mini-demonstrations. You could also put your cardboard signs in the window or attach them to trees. The worldwide action on 24 April was announced as the "biggest online demonstration ever". No matter how many people took part, it will hardly give any emphasis to the justified demands. Fridays for Future has unfortunately not grown beyond the status of a protest movement until today. Without positive foresight, something like this will die of its own accord in time.

The traditional Easter Marches for disarmament and peace in Germany did not become anything. This year would have been the 60th anniversary. Here one also went into the Internet. In the social media current statements and pictures from last year could be seen. Constructive future perspectives were still almost completely missing, because it is not only about peace, but also about security. Protest alone is hardly enough. We had already criticized this in our press release for Easter 2018 (only in German).

A major event for more democracy was planned for 12 June in the Olympic Stadium in Berlin. It had to be cancelled, but that was no loss. Such major events are usually straw fires. The we-feeling generated has a half-life of one week at most. Not only because of the danger of infection, but also because of possible terrorist attacks, I would generally avoid major events today. Madness is always and everywhere. You do that now on the Internet as well. However, this will hardly result in democracy, but rather in a weak followcracy. 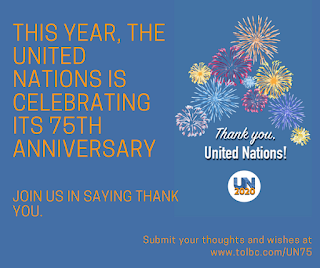 These were three examples of corona stops. I'm not interested in football or the Olympic Games. But the planned conferences for reforms on the 75th anniversary of the United Nations would have been very important. Unfortunately, they cannot now take place as planned. They will probably try to do everything on the Internet as well. That will perhaps lead to more online conferences in the future. It would be better to invest the money in improving communication technology rather than in travel expenses. This would also make global democracy easier to achieve. It is a nice idea of the UN2020 initiative that there is anything at all that can be reformed: Just say thank you to the UN. Anyone can do that. My message at the 11th click.

There can be no standstill in Mondialism. Let's not be held back! All those who see themselves as Mondialists are called upon to communicate their ideas and proposals. Who has suggestions for improvement, for example for the topic pages? Who has ideas for an organisation of Mondialists? How can we now concretely strive for the goal of a federal World Union?

We must start this now and not wait to see what world the coronavirus crisis will leave us.