On the occasion of a solemn handover ceremony to the President of the General Assembly of the United Nations, Tijjani Muhammad-Bande, on 14 May, UN 2020 and Together First published the UN75 People's Declaration, with the Plan for global Action, "Humanity at a Crossroads: Global Solutions to Global Challenges", which has been elaborated over the past months. 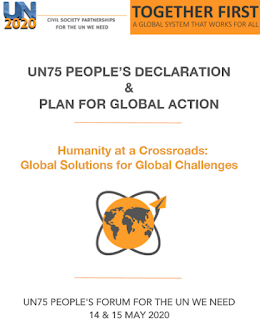 The 11-page PDF document can be found on the UN General Assembly website, among others. An unofficial German translation can be found HERE.

"At a time when change is taking place at a pace and on a scale unprecedented in history, the foundations can and must be laid for a better way for humanity. This year has the potential to serve as a decisive turning point in our journey towards a world of shared prosperity based on the commitments made. A global health crisis has shaken the foundations of the world order. No community is immune and we can no longer behave as if our current institutions were sufficient to secure our future. Like the United Nations, which rose from the ashes of the Second World War, our response to this challenge has the potential to change the world order to reflect a new reality".

What is at stake is nothing less than an active and assured voice and participation in future world political developments within the framework of the United Nations. It is worth studying the document in peace and quiet and signing HERE.

Recently I've been asked more often who the Mondialists are and what organization is behind them. We have already explained some of this on our topic page "The Mondialists". The small group of Mondialists, which is responsible for this page and the linked topic pages and which has formulated the "Declaration Cosmopolis 2100", consists of only a handful of World Citizens, who were already involved in the World Citizens' Initiative at the end of the last century.

At that time we were over 30 active members, most of whom have unfortunately passed away in the meantime. The members of our small group, from Germany, Luxembourg and Switzerland, are now at an advanced age. They are still with heart and brain, but they do not want to appear in public anymore. As the youngest member of the group I take care of that. But without their support, ideas and constructive criticism, I could not do it alone.

We have no ambitions to found an organization. We see our task only in propagating the absolute necessity of the political unification of mankind in a federal World Union. Furthermore, we support serious initiatives which are already working in this direction and we also try to initiate such initiatives ourselves. See currently the Project Model World Federation.

For our activities, which take place almost exclusively on the Internet, we do not have to be an organization. We do not need any significant financial means for this, which is why you will not find any request for donations. The 13 active websites we currently run, one website and forum in the archive and two active blogs are all free of charge. Everything is kept as simple as possible, without complicated designs. It's all about short, sober information and not about show effects.

As explained on the website mentioned at the beginning, we do not consider ourselves to be the only Mondialists in the world. Rather, all those who want the political unification of mankind and are committed to it can consider themselves Mondialists. It would be our greatest wish if all Mondialists would unite in a constructive network. This could result in a real World Citizens' Movement, as a driving force for the positive future of humanity.

As announced on 1 May, the search for the beginning of the World Union has begun. I have published a new website for it. The Project Model World Federation is to create the basis for it. Whether this strategy is parkable and works will become clear in the course of this year. The corona crisis is not a direct obstacle. For now, everything is happening via the Internet.

Of course, Likes in social media alone are not enough for this. The project needs actual participation. There are no guidelines. We first have to collect ideas that can be implemented in the foreseeable future. It should also be pointed out that the project can also transport other content, such as demands for reform and democratisation of the UN. 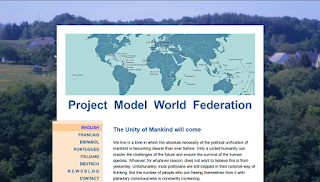 At present, I have started to write to World Citizens in the more than 40 small states that come into question, in order to win them as correspondents for the project. Since I have to search the addresses on the Internet individually, this will take some time. I would be grateful for hints and recommendations. In the NEWSBLOG of the new website I want to announce latest news about this.

Yesterday the number of approvals for our World Citizens Declaration Cosmopolis 2100 on Change.org climbed over 1000, but it took two and a half years. We had started this PR campaign - in German, English, French and Spanish - as a petition on 24 October 2017:
Become Mondialists - world citizens for the political unification of humanity! 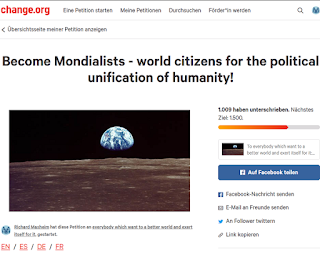 Of course, this is not a petition, like a petition to a government, an authority or a parliament. It is the other way around. The petition is a call to all those who want a better world and are committed to it. In other words, to people who normally write petitions to governments, authorities and parliaments themselves.

You can read the meaning and purpose of the appeal in the text. It is an attempt to make it clear to people that their commitment will not be sufficient if there is no clear global political vision behind it. That is why the appeal is a permanent advertisement for the political world citizenship. It was also intended as such from the very beginning.

In the meantime, the appeal has become a self-runner. There are always new approvals and from time to time people interested in mondialism and cooperation come forward.

I would like to express my sincere thanks to all those who share the appeal and thus actively help to spread our ideas and actions.

World Union – in search of the beginning

In my December 2019 post I had written that perhaps the World Union could be started small. Since the initiatives for a reform of the United Nations will probably be hindered by the coronavirus crisis for an unforeseeable period of time, I want to use the time to continue this thoughtful approach. It is a matter of finding one or more countries that would be suitable to start with the World Federation.
The idea is there, but a concrete concept is still missing from which a realistic plan can be developed. This would have to be done on a broad international basis. Too often such plans have already been worked out by small groups. Attempts to get more people or even governments to support them have then failed in most cases. The most striking example of this may be the WCPA's draft world constitution.

First of all, I would like to emphasize that these considerations are not intended to compete with or be an alternative to the efforts already underway to reform the UN. It is simply a question of starting with a World Federation without waiting for the agreement of the world powers and leading economic nations. To start small, I believe that the small states around the world are the most likely to be considered.
Of course, somewhat larger countries that are not marked on this world map, such as Taiwan, would also be suitable. One could also consider countries that do not have full sovereignty but a certain degree of autonomy.

As a first step, I propose the establishment of a Network of Correspondents who want to work for the World Federation in their home countries. Their task would be, among other things, to found World Citizen Groups, in accordance with their own ideas and possibilities.
As a second step, this should lead to a Model World Union, similar to the Model United Nations (MUN), which is already being organized worldwide. However, this would be more than the simulations of an existing institution, as with the MUN, but the development and testing of a supranational, multicultural and federal system for the future, including the necessary technical requirements.

The next steps would then be based on the knowledge and experience gained from this, up to a truly functioning democratic World Union. The political implementation will certainly be the most difficult part, because bilateral and multilateral dependencies and interests would have to be taken into account. Even if this could only be achieved by a small number of small states for the time being, it would still provide a basic model for a comprehensive world federation within the framework of the United Nations. It would be the beginning of the political unification of humanity in a World Union of truly united nations.

But one should have no illusions that this could be achieved with a mass movement in a few years. There will be a lot of work and it will be a long process, but it can be accelerated by the increasingly urgent world problems. The support of large parts of the population would certainly be very desirable. But one should not rely too much on it. In fact, it is rather unlikely. First and foremost, it is the political work of determined people who look ahead and also go ahead. It is the task of several generations. Perhaps the children who are born now will experience the great goal:
The Unity of Mankind.

Who will help with the first step?