The omission of actions which endanger or damage the general public is a characteristic of civilisation. In any civilised society such things are forbidden. Just imagine that something is forbidden because it can hurt or kill other people. However, the precept does not apply to those who reject the ban. They may continue to do whatever they please. In a functioning constitutional state, this is prevented. At the global level of unrestricted national sovereignty, it is the norm.

Since 2017 the UNO has had the Nuclear Weapons Prohibition Treaty. The International Campaign for the Abolition of Nuclear Weapons (ICAN) played a major role in bringing the treaty into being. ICAN was awarded the Nobel Peace Prize in 2017. It nevertheless took three years until 84 states signed the treaty. After Jamaica and Nauru, UN member Honduras was the fiftieth seed to ratify the treaty on 24 October. This means that the ban on nuclear weapons can officially enter into force on 22 January 2021 as part of current international law.

In their reports last week, the media never tired of pointing out that this treaty was only symbolic. The nuclear powers and most of their allies had not even participated in the discussions. They belong to the kind of global after-thoughts who are unwilling to stop endangering and possibly destroying humanity. Nor can international law force them to do so, because when it really matters, it is no more than symbolic. There is no generally binding and enforceable World Law.

Nevertheless, the Treaty on the Prohibition of Nuclear Weapons is a positive milestone in the history of political disarmament efforts and its potential impact should not be underestimated. In the long term, the nuclear powers cannot escape the moral pressure exerted by the official ban on nuclear weapons of mass destruction. It is becoming increasingly difficult for them to justify their kamikaze policy. That is why they are trying so hard to reject the Treaty. Indeed, approval of the Treaty also signals a trend that cannot be dismissed as merely symbolic: It is the emancipation from the supremacy of a few major powers over the rest of the world, as evidenced in particular by their right of veto in the UN Security Council.

However, it is questionable whether complete disarmament of nuclear weapons is even conceivable in the current world order. The mondialists have shed light on this question in a topic page: Is a world without nuclear weapons possible? Our conclusion: it must become possible. The prerequisite is the political unification of mankind in a World Federation. We also expressed this in our Appeal to the Mayors for Peace. If the current Treaty on the Prohibition of Nuclear Weapons is to lead to the disarmament of all nuclear weapons, the groups and organisations in favour of it must also work to ensure that the preconditions of world politics are met. Otherwise, everything will remain as it is and the danger of a devastating nuclear war will not be averted. 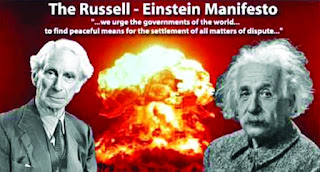 Shortly before his death, Albert Einstein had signed a manifesto against nuclear armament written by Betrand Russel. Throughout his life he pleaded for the abolition of war and for general and complete disarmament. He always saw the prerequisite for this in a world government responsible for certain affairs of mankind. He was one of the most prominent advocates of World Federalism. Everyone interested in the ban on nuclear weapons should have read his collection of writings "Einstein on Peace".

If the current Nuclear Weapons Prohibition Treaty is to lead to the disarmament of all nuclear weapons, the advocating groups and organisations must also work for world political conditions. Otherwise hardly anything will change and the danger of a devastating nuclear war will remain. The danger will become much more acute as the world problems of the future, which are now foreseeable, increase. The only logical rescue is a solidary, federal World Union of truly united nations.