The origin of the fantasy passport known as the World Passport is in Paris in the autumn of 1948. It was there that Garry Davis, an American actor who had been a bomber pilot during the Second World War and was hardly known until then, ended up. On Broadway in New York - not in Hollywood - his art was not in demand at that time. 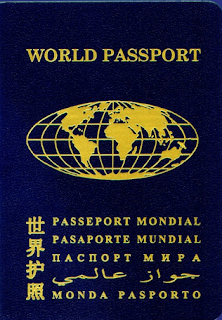 Seriously impressed by Emery Reves' book "The Anatomy of Peace", Davis decided to renounce all nationality for world peace and renounced his American citizenship at the US Consulate in Paris. In the course of his subsequent actions at the extraterritorial venue of the third UN General Assembly, he made himself a world citizen's card with the serial number 1 and promptly a resourceful reporter gave him the title "World Citizen No. 1".

Then as now, the press gratefully accepted such curiosities. His tent on the grounds of the Palais de Chaillot attracted onlookers and sympathisers. A group of Parisian intellectuals who lingered in the shadows of the events of the time - including Albert Camus, who later won the Nobel Prize for Literature - sensed the dawn and joined Garry Davis in solidarity. Their media highlight was a performance on 19 November 1948 during the UN General Assembly. The assertion that this inspired the adoption of the "Universal Declaration of Human Rights" on 10 December can be seen as retrospective pomposity. Statements such as: "Garry Davis, the man who fought for human rights" are absolute nonsense. 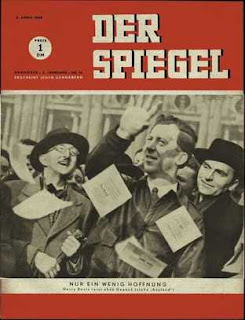 Although the Paris action had no discernible effect on world politics and was viewed with scepticism by World Federalists who had been active for some time, it did attract considerable public interest. A world citizens' movement emerged, whose initiator was Garry Davis. An unverifiable number of people all over Europe, up to 700,000, were registered as world citizens. The bureaucratic effort required to do so overtaxed most of the world citizens' organisations entrusted with this task and led to their insolvency.

In 1949 Garry Davis made a lecture tour through the South of France for the World Citizens Movement. Within the framework of a so-called "Mondialisation", the town of Trouillas near Perpignan declared itself a "World Territory". Hundreds of such symbolic declarations followed in French communities and in other countries. Albert Einstein, who had telegraphically congratulated Davis the year before for his action in Paris, commented on the invitation to support the "Mondialisation" of the town of Cahors:

" ... It gives the impression that the leaders of the movement are serious about their proposal; but it seems to be a soap bubble. If you advocate such airy ventures, you will soon be taken seriously and will be of no use at all. (Source: Einstein, On Peace)

Einstein had probably realised by now how the initial flash in the pan of the world citizens' movement was burning out. Davis himself had started to issue world citizenship passports against donations and later fees. It was considered chic in the scene to own such a paper. Because of this, and also because of other arbitrary actions and provocations, a dispute with the French cosmopolitans arose and finally led to a separation. Garry Davis went his own way. These led him first to India, where he studied some oddities.

Back in the USA, Davis regained American citizenship by remarrying. Here he founded his World Service Authority. I have taken the trouble to read the Ellsworth Declaration of 4 September 1953 in its entirety. It is interesting because it documents the mental state of Garry Davis at that time: A hopeless mixture of world-weariness and half-baked ideas for solutions for a humanity that does not exist in this form. A sermon of the "World Citizen No. 1" against reality, like a chaotic philosophy, which completely ignored the already known and logically formulated perspectives and plans of serious world federalists. It culminates in the egocentric fantasy of being the world government itself. The German journalist Peter Coulmas wrote in 1990 in his book "Weltbürger - Geschichte einer Menschheitssehnsucht" (World Citizens - History of a Human Longing):

"His cosmopolitan ideas, however, especially the claim that no single state or government was responsible for him, were seen as the eccentricities of a kinky American, not the visions of the prophet of a new age".

Garry Davis continued to expand his "world service". The World Passport fed his husband. With time, other worthless documents were added. He travelled all over the world for them and handed out free copies of the passports to celebrities, whom he then named as figureheads. As a rule, the press played along for free. And if he got into trouble somewhere now and then, he also used this for publicity. He wrote several small books about this. Davis did nothing else but sell the World Passport. It was the role of a lifetime. I wouldn't say that he only had money in mind. His personal conviction that he was making an important contribution to world peace and the unity of mankind is credible. Otherwise, his optimistic commitment up to his old age would be hard to understand. 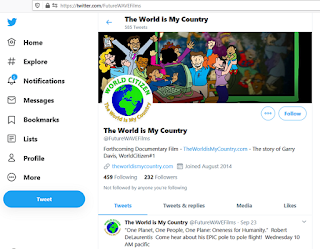 Garry Davis died on 24 July 2013, three days before his 92nd birthday. The World Service Authority will be continued by successors. The World Passport business continues and continues to feed its protagonists. Advertising has been intensified and currently takes place on all conceivable channels on the Internet. Twitter uses every possible topic to attract attention.

The centrepiece is the 2017 film "The World is my Country", produced by filmmaker Arthur Kanegis. It is a mixture of documentary film about the life of Garry Davis and typical American advertising for the World Passport. We had discussed it in the World Citizens Forum (German). There is now even a fan club. It is currently reported that the National Educational Telecommunications Association wants to distribute the film to TV stations (PBS) in the USA for possible broadcasting. No problem if the DVDs are made available free of charge. René Wadlow, president of the Association of World Citizens, wrote to a world citizens' meeting in Paris at the end of 2017:

"For those of you who knew Garry, it's worth seeing the film; it would also be useful to buy a copy of the film to show in France. However, I do not believe that this film can be used to recruit new world citizens. There is too much emphasis on the world passport, not as a symbol of world citizenship, but as a valid and recognised travel and identity document. Some people who buy one do so not because they subscribe to a world citizenship ideology, but because they do not have valid identity documents, and if they use the World Service Authority documents as such, it ends badly for them".

This is the main reason why the World Passport business must be criticised and warned against this fake document. When you are told by the World Service Authority that the passport is "factually" recognised by many countries in the world, it is misleading.

The "de facto" recognition of the passport is derived from this, because it is stamped at border controls from time to time. This should not be a problem if you can show a real passport and ask the friendly border official to stamp the second, symbolic passport as well. A bakshish may be helpful. It may also happen that border officials accept the World Passport out of ignorance. In reality, the World Passport is not officially recognised by any country in the world. At best, it has a symbolic character. What one does not learn from the World Service Authority, for example, is the experience of an African who was in prison for several months because of the passport. So it can happen to every bona fide globetrotter that he is allowed to visit one or the other detention cell from the inside.

Since this misleading advertising for the World Password is done knowingly and intentionally by those responsible, I can only regard their actions as dubious. Every serious World Citizen and World Federalist should therefore stay away from this dubious business. Apart from that, I also consider the style of hanging the commitment for a World Federation on such a piece of cardboard to be idiotic. In the meantime, there are other passports circulating on the market of impossibilities that look similar. You only have to google. I very much hope that the insight will prevail that such nonsense does more harm than good to our cause.