After the decline of the World Citizens Movement initiated by Garry Davis, various organisations were formed around the globe on the topics of world citizenship, world government and world federalism, most of which no longer exist today and have fallen into oblivion.

The Association of World Citizens (AWC) was founded as the World Citizens Assembly (WCA) in San Francisco on 25 July 1975, during the celebrations of the 40th anniversary of the drafting of the UN Charter. It succeeded in absorbing various currents from the world citizens' movement. The AWC received its present name in 1990 and continued to organise world citizens' assemblies, most recently in Taiwan in 2001, as can be seen in the pictures, with great participation.

From the very beginning, the AWC was conceived as a peace movement of world citizens. It was committed to strengthening and developing the UN and was registered as a non-governmental organisation (NGO) with consultative status with the UN Economic and Social Council. The goal of a peaceful world community remained diffuse, however. There was a lack of clear statements on concrete concepts of world order, such as world federalism.

Douglas Mattern has been a very active President for the first three decades of the AWC. He was the first to visit Stanislav Petrov, the man who saved the world in 1983, in Moscow, awarded him the AWC World Citizen Award and invited him to visit the United States. Douglas Mattern died after a long illness on 20 Jully 2011 at his home in Palo Alto, California.

He was succeeded by his deputy, Professor René Wadlow, who remains President to this day. He diligently writes articles on various topics, which are collected on the official blog of the AWC. They also appear in other places, mainly in so-called alternative media. The articles are very informative. However, Professor Wadlow seems to believe that all the world's conflicts can be resolved with the magic formula of "negotiations in good faith". 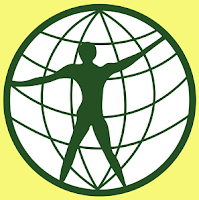 In his articles he often lets his theosophical worldview be seen through, for example when karma is mentioned. In an article on "Garry Davis and Indian philosophy" (French) René Wadlow explained the unnatural posture of the figure on the yellow flag of Garry Davis by means of the chakras. Such a thing is of course pure nonsense.

According to the official, rather unattractive website of the AWC, Dr. Hong Tao Tse is the association's vice president. Dr Hong is the founder and president of the Federation of World Peace an Love (FOWPAL), which initiated the International Day of Conscience at the UN. At the official address of the AWC in Novato / California the secretary and treasurer Sue Zipp can be found. External Relation Officer Bernard J. Henry-Beccarelli has a page on Facebook and maintains the YouTube channel for the AWC. With his current photo on the site, you can scare little children.

What the other two professors do for the AWC is not clear from the website. There is another representative of the AWC at the United Nations in New York who is not mentioned here: Dr Lisinka Ulatowska. She also represents the Institute for Planetary Synthesis. This is an offshoot of the Lucis Trust, an esoteric New Age sect founded by the theosophist Alice Bailey. See also the World Citizens Forum (German).

The days of Douglas Mattern are long gone. There is reasonable doubt that AWC International consists of many more members than the Board of Directors. A question I put to the President regarding the number of members was not answered. It is also hardly conceivable that the AWC with such irrational backgrounds would be taken seriously at the relevant political level. A solid world community cannot be built on esoteric mumbo jumbo.

But there are still national branches of the AWC that are independent of the international Wadlow Association. These I will discuss in a following article.