Last year I wrote about the origins of World Religion Day, which is celebrated today on 17 January. Religions continue to exert a strong influence on a large part of humanity. The spectrum ranges from intolerant fanaticism to selfless altruism.

Just as the world is constantly changing, so are religions. What appeared to be unbearable tyranny yesterday can have beneficial effects today. World Religion Day stands for the good sides of religions and their positive commonalities. See Pope Francis' Encyclica Fratelli tutti.

There are a number of interfaith organisations that focus specifically on the positive commonalities of religions, work to strengthen them and have national chapters as well as local groups in many countries. Here I would like to mention a few: 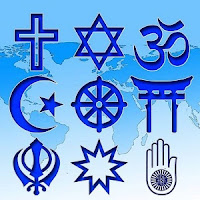 Parliament of the World's Religions

I would also like to remind you of the upcoming Week of Interreligious Harmony from 1 to 7 February, in which our small group of Mondialists will participate with a special internet action.

As World Citizens and World Federalists, we should recognise and use the positive potential of religions. It would be a worthwhile task to convince the interfaith organisations mentioned above, which are easily accessible via the internet and well connected in social media, of the advantage of world federalism. Their commitment to a democratic World Union would be of considerable value.