On the International Day of Multilateralism

Today is the "International Day of Multilateralism and Diplomacy for Peace". Since 2019, it has been celebrated worldwide on 24 April. Under the impact of "America First", the United Nations General Assembly had proclaimed the day because it believed that upholding the values of multilateralism and international cooperation is fundamental to promoting and supporting the UN's three pillars of peace, development and human rights. The day is an affirmation of the UN Charter and its principles to resolve disputes between nations by peaceful means. 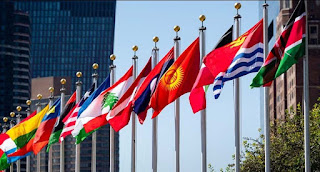 To mark this year's International Day of Multilateralism, a group of more than 100 civil society organisations have released a joint statement calling for a more democratic UN. Signatories include organisations such as Avaaz, Greenpeace, Open Society Foundations and The Nature Conservancy, as well as networks such as the Coalition for the UN We Need, Forus International, Together 2030 and Together First. The campaign is led by CIVICUS, Democracy International and Democracy Without Borders.

Under the heading "We the Peoples", a reference to the first words of the Preamble to the United Nations Charter, the joint document calls on the United Nations to implement three concrete reforms: The instrument of a UN World Citizens' Initiative, a United Nations Parliamentary Assembly and the office of a UN Representative for Civil Society. The declaration and the list of supporters were published on the campaign website. The document is to be sent to the UN and its member states.

This is the right way to go. As "We the Citizens of the United Nations", the Mondialists therefore welcome the campaign. I have therefore signed the statement as spokesperson for our small group and ask all World Citizens to support it as well. Click here to read the declaration.