It is not only since yesterday that different ideas have existed in the global scene of World Federalists about the right path that should lead to the political unification of mankind in the form of a World Federation. Four paths can be identified that must wind their way through the difficult terrain of an uncertain future in order to get closer to the goal. In the process, unpredictable lateral connections and shortcuts may also emerge.

A - Transform the United Nations

This path seems to me to be the most realistic. It takes seriously and appreciates what already exists. Building on this, an attempt is made to improve the system. We Mondialists mean less a short-term transformation, but more a gradual further development, but if possible in quick steps. 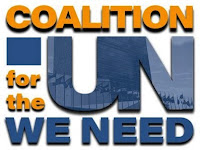 The "Coalition for a UN we need" takes a similar view. Here, many steps for the further development of the United Nations are integrated, such as the initiative "We The Peoples" with its three goals: World Citizens Initiative, Parliamentary Assembly at the UN and the establishment of a UN representative for civil society.

B - Integrate the Regions

The creation of regional communities of states is another path that can lead to a genuine world community. The European Union (EU) is setting a good example. Despite all the difficulties and setbacks, it is a success story. But Europe is not enough. It is followed by the African Union (AU) and other regional groupings. This could become the federal World Union (WU). This path would be one hundred percent compatible with path A and a parallel reinforcement.

Then there is the idea of creating a global community of states by uniting the democracies of the world. Chris Hamer had published an article three years ago on the possibility of a World Community of Democratic States based on NATO and OECD. This approach, like Path B, could be compatible with Path A. A recent proposal from the UK to turn the G7 into a D10 (PDF) is taking shape. I will deal with this path in more detail in a subsequent article.

There are now over a hundred, more or less well-known, drafts of world constitutions. It is likely that such a constitution will be needed for a future federal World Union. On Path A it already exists. It is the Charter of the United Nations. This would only need to be reviewed and adapted from time to time. Other unions, whether regional or global, would draw up their own constitution and decide on it democratically. Existing draft constitutions can be helpful for this, but they are nothing more than non-binding models and do not signify a particular path towards World Federation.

The World Parliament and Constitution Association WCPA sees things differently. It has elevated its "Earth Constitution" to a binding guideline that the world must follow. This is an attempt to put the cart before the horse. I consider this path irrational. Moreover, the insignificant club of its leading protagonists has already lost its way in the jungle of esoteric fantasies and conspiracy theories. Therefore, this path is not only useless but may possibly have a disruptive effect on the progress of paths A, B and C.

it must be admitted that, unfortunately, far too few people are still interested in the Unity of Mankind, let alone would commit themselves to a World Federation. That is why the World Federalist scene is so weak today. The consciousness necessary for this cannot be prayed for or meditated upon. Education and cooperation are needed here, and we need a new World Citizens' Movement for this.

Therefore, once again, the reference to this Appeal to all those who want a better world. Of course, this must not be all. Much more needs to be done. It is high time for new ideas, and one should also look at which older ideas have not received attention so far.